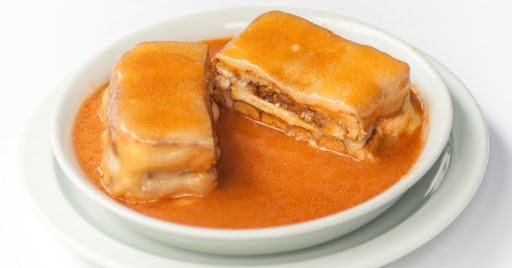 The name “Francesinha” means little to those who have never lived in Portugal. There are even thousands of people in Portugal itself who have no idea what it means.

The Francesinha is a dish that was born in Porto and can be basically exemplified as being made with two slices of lightly toasted bread, between which there is: a beef steak, a hotdog sausage, Mortadella, fresh sausage and cheese. It is completely wrapped in cheese slices and put in the oven until the cheese begins to melt. Finally, add the most important ingredient of the Francesinha, the hot sauce, lightly spiced and seasoned.

According to history, there was a Portuguese man by the name of Daniel David Silva who worked in the A Regaleira restaurant in Porto during the 1950’s. Having once emigrated to France, he used the typical French sandwich, the Croque Monsieur, as his inspiration.

His idea was to adjust the ingredients to the tastes of the gastronomic culture in Porto, for people accustomed to hot food consisting of strong flavours, and as a result he created the famous sauce that is without contest the soul of any good Francesinha.

The diverse range of alcoholic beverages and the exact quantities of these used definitely affects the sauce’s flavour and its acidity or sweetness. Some restaurants even make renowned sauces whose ingredients have been kept secret for generations.

But if the sauce is the soul of the Francesinha, the quality of the meat and the type of bread used are its structure, being the final strong taste influencing its critical acclaim.

From cheap confection, it became a plate of the people and ended up becoming one of the most appreciated delicacies from the city of Porto, even to the extent that restaurants serving solely Francesinhas came into existence.

The Francesinha was selected by the site AOL Travel as one of the top 10 sandwiches in the world considering that, despite its diminutive, this delicacy is “more than meets the eye”.

On the list made by AOL Travel, the Francesinha appears alongside the Roujimao (China), the Smorrebrod (Denmark), the Kati Roll (India), Pan Bagnat (France), Ice cream sandwich (Italy), the Indian (Navajo), the Taco (United States), the Chip Butty (United Kingdom) and the Cemita (Mexico).

Just like other things in life, the Francesinha can’t be explained, it needs to be tried.